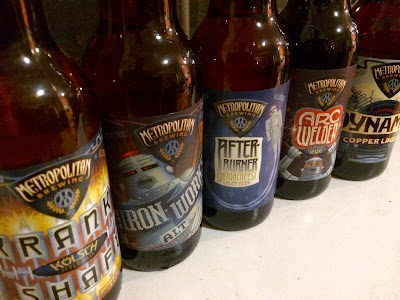 Guten tag! Germany or bust! My bags (and bottles) are packed! I'm headed to visit my dear friends, Csilla and Daniel who live in Ludwigshafen, right outside of Frankfurt.

Daniel grew up in Mönchengladbach. He's a big fan of football and a great beer. His favorite style is an Altbier, a copper to brownish lager with medium body and no hops or esters present. This beer style originated in Düsseldorf near his hometown. 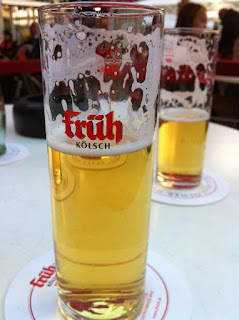 On my last visit to Germany, in 2012, my friends took me to the breweries of Colonge and Düsseldorf. At that time I was not into home brewing yet, but I have always had an appreciation for great beers and trying the local brew. I loved the history of these two cities, which are separated by a river, having some very distinct and almost opposite styles. And I was amazed to find out that almost all the breweries in these two cities only brew one beer and true to one style per city. Each city stakes their claim on a style and each brewery has an interpretation of that style...  Colonge owns the Kolsch, a light and complex refreshing lager (see pic to left from my refreshing bier at Fruh) and Düsseldorf on the other side of the river claims a bit darker style... an Altbier. In each city they have many breweries but they only brew that one style and one beer per brewery. So when you go there you don't need to see a beer menu, you just ask for a beer and they will bring you their house beer. Think of it as beer tapas... you hop and hop from one brewery to another trying the subtle differences in the beer styles that each city has to offer.

But be careful when you are drinking beer in Colonge... if your glass is empty, they just bring you another without asking. They do not ask you if you want another beer, they just assume you do if your glass is less than half-full. If you want them to stop bringing you beer, you need to put your beer coaster on top of your beer glass.

When I told Daniel that my neighborhood brewery, Metropolitan Brewing, was brewing an Alt, he was surprised and excited to try it. Until recently, Altbier been a very rare beer to find commercially. So I decided to round up a collection of some Chicago brewed lagers to take with me. Metropolitan has yet to release their Oktoberfest (it will be hitting the markets very soon in Sept.!), but they were kind enough to provide me with a few bottles for the journey to Duetchland! I'm very excited to share these beers with my friend and ask him what he thinks. Maybe he will be nice enough to provide some reviews once he's had a sip! What do you think Daniel? 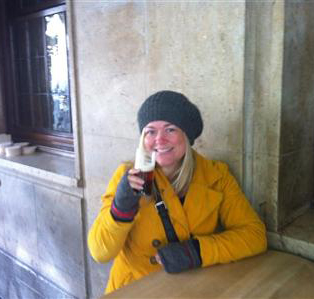 Nancy Brew drinking an Altbier outside at Uerige in Düsseldorf. It was a bit chilly and rainy on this Autumn day, but my company and the beer kept my spirits warm.

Pfaffen Brewery - Cologne
Their food is amazapants! Pretty much a fried egg on anything gets a thumbs up from me!

Fruh - Cologne
Too easy to sit outside and put down a handful of these without even realizing it... especially after you climb the church tower across the street.
Füchschen Alt  - Düsseldorf
Crazy like a fox, this place has some character.

Nancy Brew wants to know!
Do you have a favorite German beer style or brewery? Is it in Germany or the States?
Do you like brewing lagers? If so, what's your favorite style to brew?