How to become a better brewer... Study the Classics. 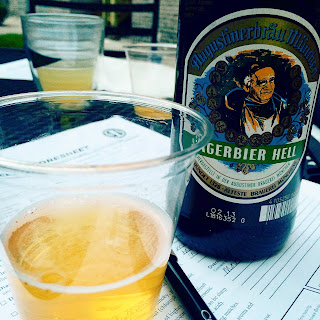 When I first got into homebrewing, I had no idea that there was such a thing as classic beer styles, but I soon learned that you needed to know them, if you wanted to be a better brewer and/or were going to enter into home-brewing competitions.

The first time I entered my Maironberry Belgian Triple, I was a bit confused on which category it fell into... was it a Belgian Triple, a fruit beer, or a Belgian specialty?  I ended up entering it as a fruit beer, because the fruit was primary dominate. But then it got me thinking... What else don't I know about beer? I mean I've been drinking it for well over 15 years, good beers too, but it's a whole different level when you start to brew it. I thought if I'm going to embrace brewing beer, invest in equipment and the hobby, spend the better part of my days elbows deep in grain, I should further my knowledge and get this right, right?

So from Fall of 2013 to the Summer of 2014, I spent many of my days studying for the BJCP. At that point I was brewing almost weekly, and Brewing Classic Styles, was my go to guide on many recipes. I had fallen in love with brewing pretty quickly and felt the need to literally emerge myself in all things craft and to be honest I felt a bit behind... How was I not doing this any earlier in my life? I had always loved craft beer and even thought about homebrewing years ago, when I'd attend other craft beer festivals where they had a homebrewing shop in attendance. I just never pulled the trigger until Spring of 2013. And at that time none of my friends were brewing and I wanted to find others who shared my passion and had some knowledge and more experience than me. I was looking for a community.

I researched online, and found a bunch of local home brew clubs and online forums. There were a few local club stand outs... Square Kegs, Evanston Home Brew Club, and CHAOS (Chicago Hombrewers Alchemist of Suds). I loved all the clubs when visiting their monthly meetings, the members were friendly, the beer was tasty, but there was one standout... CHAOS. They are a registered non-for-profit organization dedicated to furthering one's education on craft brewing and becoming better craft consumers through classes and seminars. They also had their own space to brew, which is key in an urban area, and they had a ton of social events, perfect for the social butterfly in me.

Luckily, that same year they were offering a series of monthly classes to study for the BJCP, a Beer Judge Certification Program which studies the classic styles. I had stumbled upon these late, and didn't start attending the classes until Fall 2013. The 2 hour classes consisted of studying one classic category per month. This was great, because we'd get an overview on the style by a BJCP Master, James Lewis, and then taste classic examples of the style using style sheets to take your notes as you would do on the tasting exam or when beer judging. The classes started in January 2013, and I had just jumped on board in Sept. so I was way behind the rest of them, which meant I had to do a lot of studying on my own. This seemed challenging at first, I had suddenly realized I forgot how to study. I hadn't studied anything since college, which was well over a decade ago, but to my benefit BJCP.org offers PDF study guides and flashcards that you can download to help you review.

I downloaded the flash cards to study/memorize the classic styles and off flavors. I spoke them out aloud, highlighted important differentiators, and wrote them out in a notebook. I even had my friends quiz me with the cards. I also reviewed the judging ethics guidelines, which also counts for a portion on the exam and over all score. The BJCP is a 2-part exam. The first is an online multi-choice, multi-answer timed 60 minute exam that consists of 200 questions. You must get 70% overall or higher to pass and 70% or higher. The exam has questions ranging from: technical brewing aspects, classic style references, detecting off-flavors, and judging ethics. After you pass the online exam, you're allowed to take the tasting exam at a sanctioned registered location, which you must register for. Many places have waiting lists, so you need to secure your spot once you pass the exam, as your opportunity to take the tasting exam will expire in one year from passing the online test.

I recommend purchasing the 3 pack exam. I took the first one totally blind, before heavily studying, but still with some knowledge. I noted the questions and what they asked and what I needed to improve on in my areas of study and I assessed my pacing then adjusted my method to complete it in time. I found it most efficient to answer every question as you came across it and if I was unsure to flag it and revisit later. When I tried to skip questions, I just ran out of time and wasn't able to answer everything in the 60 minutes. Clearly I didn't pass the first go. It wasn't my intention to pass, I just wanted to get a feel for the environment of it first. The second attempt I made was a success and I did that by heavily studying all the areas covered.

Once I received my certification for Provisional Judge, I started studying up for the tasting exam. This consisted of actually drinking the classic styles and partaking in some competitions as an Apprentice or Provisional judge. I bought one of each of the classic styles and photo documented the label with a poured sample in a plastic taster glass to simulate the tasting exam. I filled out an offical judging form for each style of beer I tasted, which helped with sensory memorization. Binny's, in Chicago is a great beer store for these purchases, because they sell most of the classic beers and you can usually find in build your own six pack area, if not one of the employees usually will be nice enough to open up a pack to put it in that section. Get a friend or neighbor to help you finish your beers, as you should only allow yourself to drink 1-2 ounces of each beer, so that you don't get too tipsy and hinder your senses on the later beers.

The tasting exam is also intense. I was able to take mine at the AHA 2014 National Homebrewers Conference. I was in a conference like room, with long rows of tables set up with water and crackers set up on each. Your given mechanical pencils as regular Number 2s shavings, may infringe on your sense of smell. And wearing perfume, cologne, or chapstick/lipstick is strongly discouraged, since these too can interfere with yours and your neighbors senses. You're given blindly 6 beers to evaluate in 15 minutes a piece. The only thing that is provided to you, is the style of beer. Everything else you're senses and beer knowledge must do the rest of the work. Which includes observing and documenting the beer for: aroma, appearance, flavor, mouthfeel, and overall impression, noting any off-flavors if present and how well it falls into it's said category. After turning in all of your judging sheets, you must wait for 3 to 6 months for your scores to come back, since they are hand-graded and compared to Master judges notes of the exact same beers. While you are judging the beers in one room with fellow judging candidates, master judges are in a room near by also judging the exact same beers at the exact same time that you are taking your tasting exam. There notes are used to compare and contrast against your notes to assess your level of knowledge and understanding of the styles. Then there is a point value system to rank your level, once you passed. I luckily found out on Christmas Eve 2014, that I passed and was ranked a Recognized Beer Judge, it was the best Christmas present!

I also continue to further my education on craft beer by recently passing the Cicerone (CBS) exam with a goal of working towards the Cicerone title and I'm also currently reading Brewing Like a Monk as some of my favorite styles are Belgian. I have yet to brew all the classic styles, that would be a definite undertaking, but I wouldn't discount that possibility either. I love to continually evolve and work towards being a better brewer.

- Are you interested in becoming a BJCP or are you currently studying to be a judge? Are you one already? If so, where are you located?

- What are you doing to become a better brewer? Do you have a method, a recommended book?

I'd love to hear what your thinking!