I can't believe it's Autumn already. I walked out my place this morning heading to work and the sidewalk was littered with golden orange leaves swirling around. I feel like time is moving faster than I can pour my beer... and I've put off my Summer brews post long enough, so here goes my Summer brewing montage!

I'm also introducing a new format... I've come to terms that I'm a very visual person and I sometimes feel overwhelmed and bogged down about writing an entire blog entry about a single brew day given that I brew so frequently. I also must admit that I love data, so I'm going to provide some simple key notes on each brew and lots of visuals. I would love to hear your feedback on what you like about the posts too, Cheers! 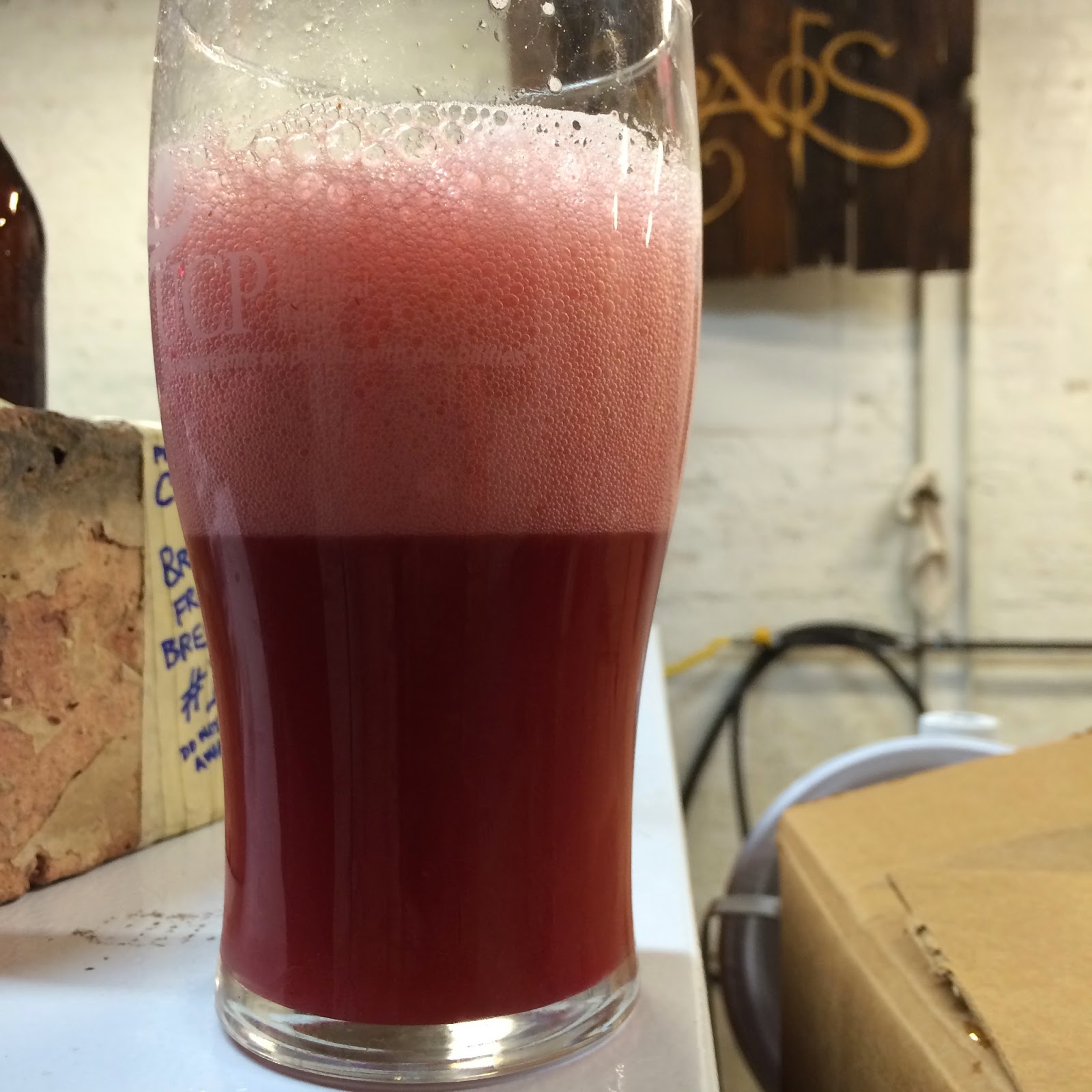 Oh So Hossa
Marionberry Belgian Triple 9.5%
- Brewed batches 2-3 (bottled + kegged)
- Brewed for NHC Competition (Awarded a silver certificate, scoring higher than 33/50) Served at NHC Club Night.
Brewing notes: A favorite of mine, but pricy to brew, because I need to special order the puree from the Pacific Northwest. I'll continue to brew it, but maybe limit to only 1-2 batches annually in late Spring.
(Pic to left: first keg pour! A little too much carbonation, but I love the rich red color and pink head, yum!) 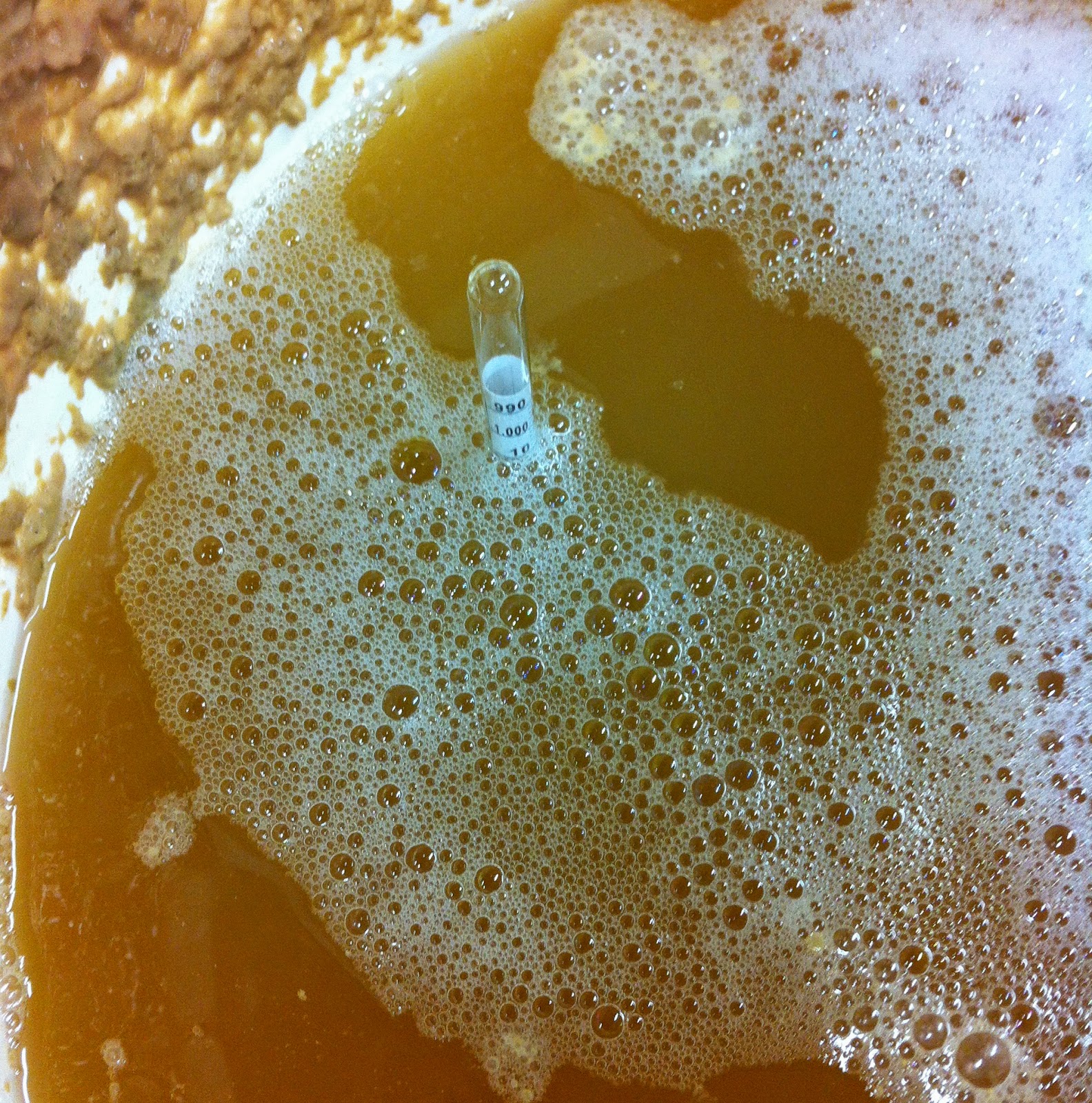 TruTrip
Belgian Triple 8.5%
- Brewed batches 1-2 (bottled)
- Brewed for HOPS for Youth,  charity event.
Brewing notes: I'm kind of a back-wards brewer, having dived into the weird flavors and now back tracking to brew the classics. There's no funny business in this one. It was tasty, but I prefer to brew the unusual. The next time I reach for a classic Belgian Triple it might as well just be Karmeliet, no need to try and reinvent that!
(Pic to left: shows the FG reading) 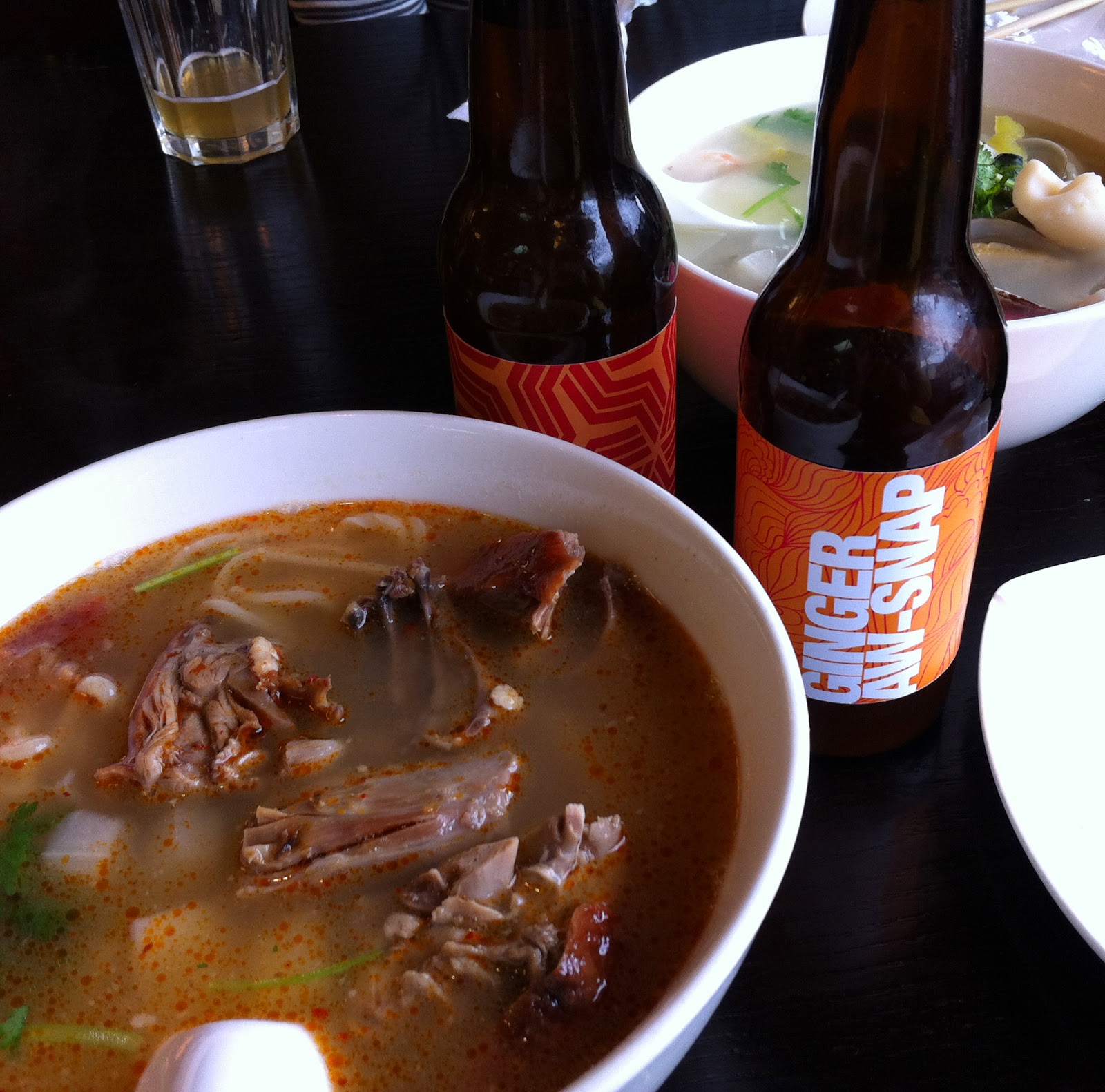 Ginger Aw-Snap!
Belgian Wit, with pink grapefruit + ginger 6.5%
- Brewed batches 2-4 (bottled)
- Brewed for Hamburger Mary's Competition
Brewing notes: I love this beer and batch 4 was by far the best. I'll continue to brew this annually, it's a fantastic beer for everyday refreshment and perfect for pairing with any Asian BYOB dish.
(Pic to left: at Sing's noodles in Chinatown sharing some homebrews with my culinary friend, Loni, who works at The Spice House. SO GOOD!) 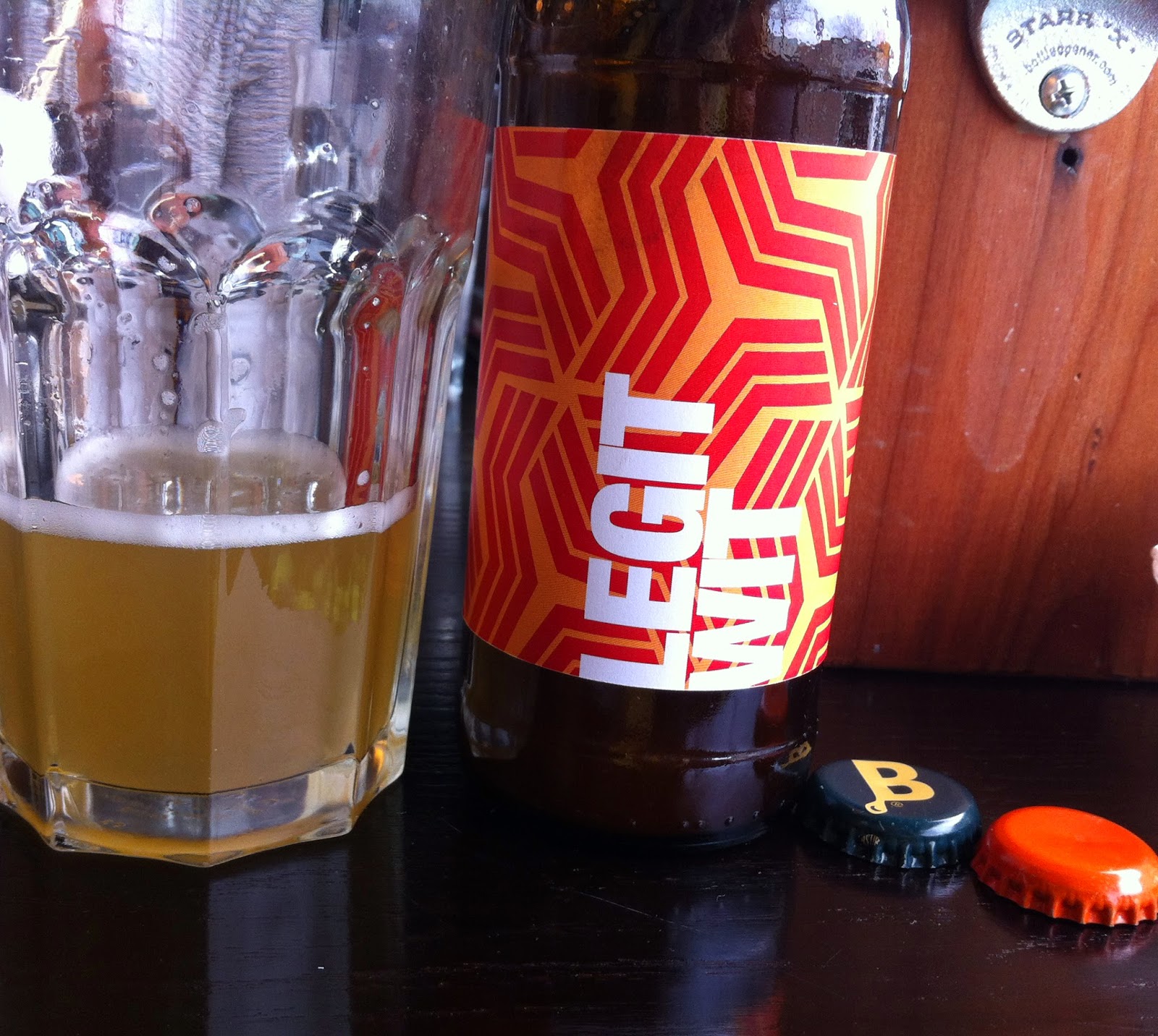 LegitWit
Belgian Wit 6.5%
- Brewed batch 1 (bottled)
- Brewed to review classic style. I'm an experimenter when it comes to brewing. I wanted to taste my base beer for Ginger Aw-Snap! This one is stripped from of all the shenanigans that I usually add in the secondary.
Brewing notes: No funny business, it's a legit Wit.
(Pic to left: side-by-side comparison to Snap, at Sings) 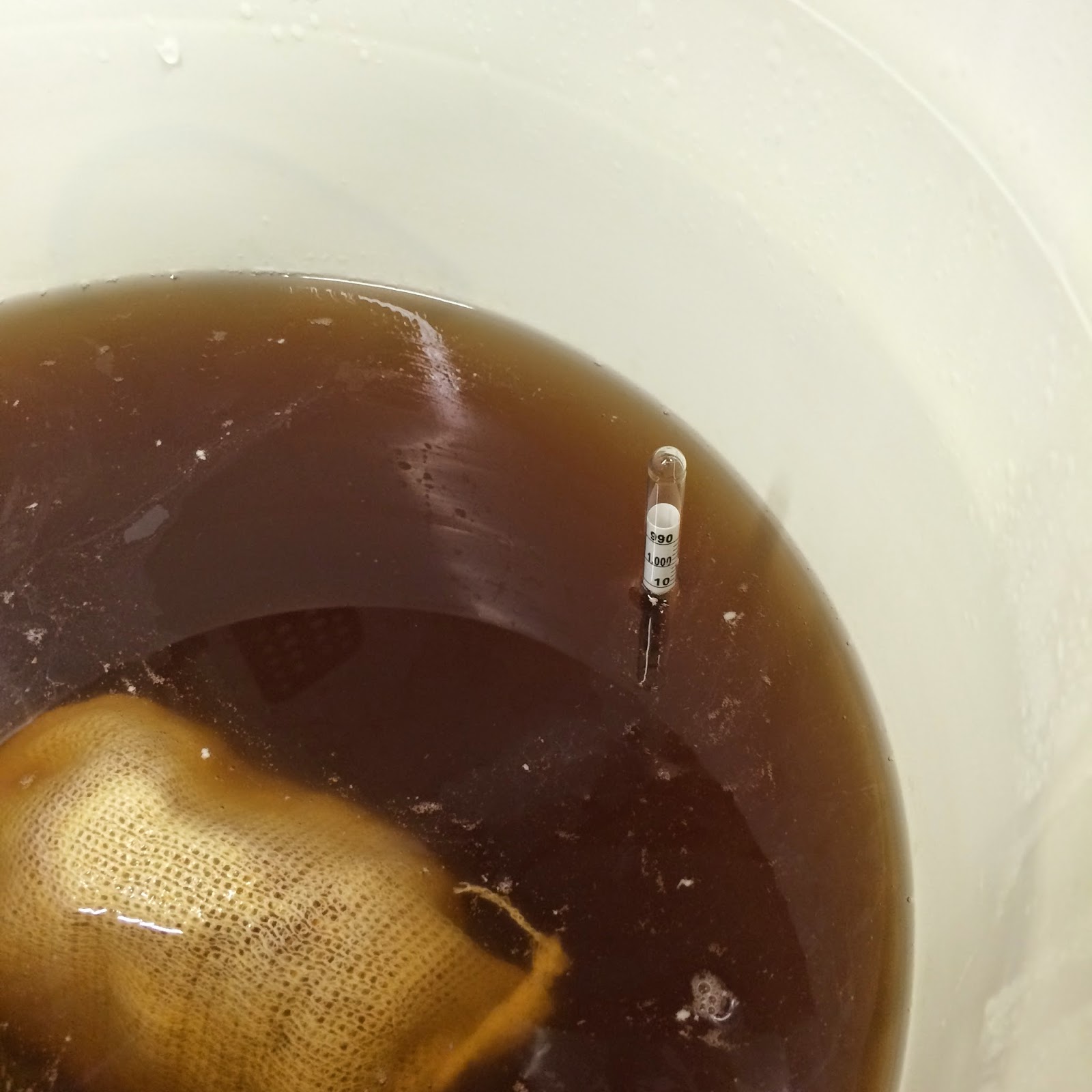 French Kiss
Saison with lavender + lemon thyme 8.5%
- Brewed batches 1-3 (bottled, kegged, bottled)
- Brewed initially for International Women's Day demo at BrewCamp organized by Hail to the Ale,
Brewing notes: I used lemon-thyme and lemon zest in Batch 2, so the lemon was very pronounced. Batch 3 I used just thyme, lemon zest, and the same amount of lavender and it was more sweet and balanced. Batch 3 was more to my taste.
(Pic to left: herbs added to the secondary.) 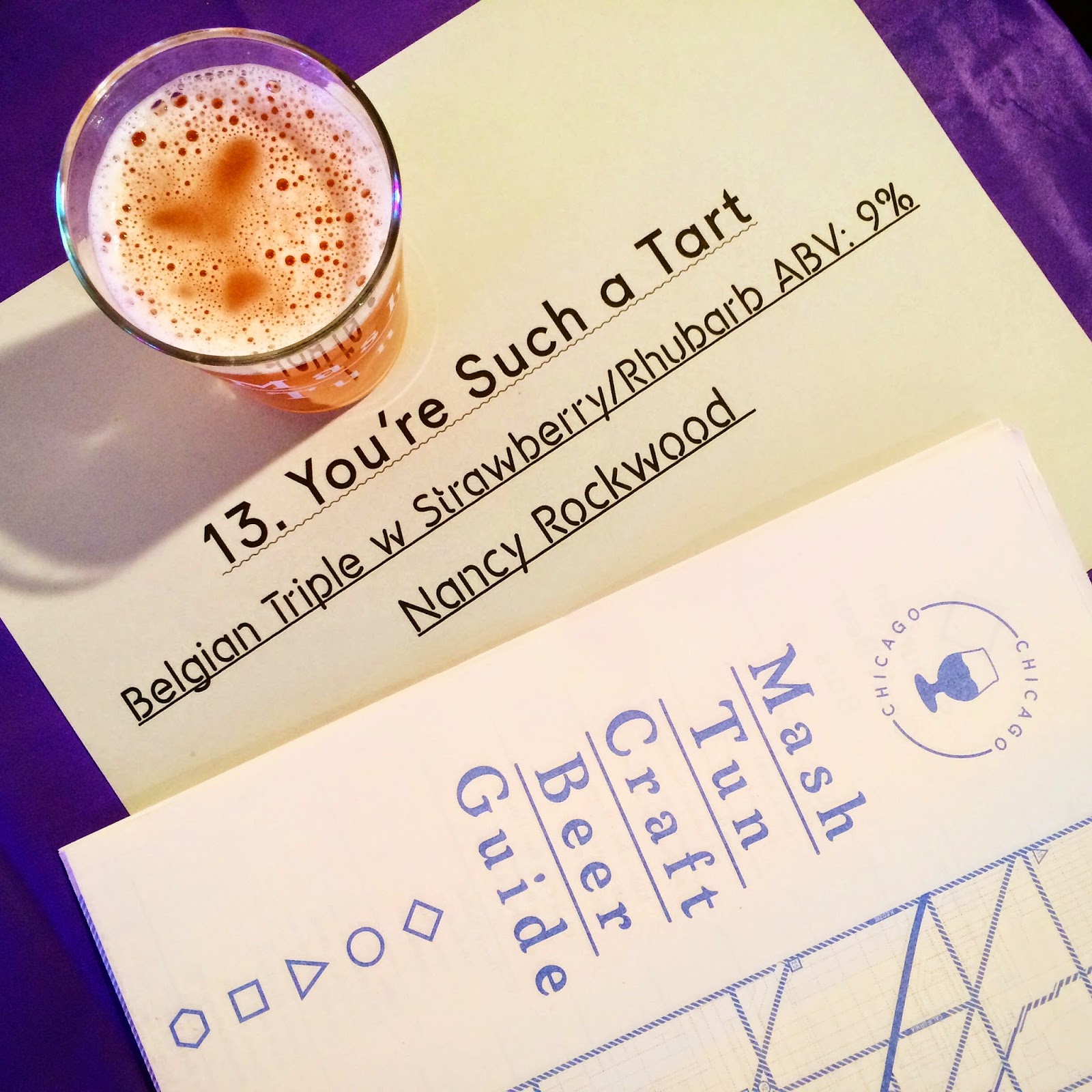 You're Such a TART!
Strawberry Rhubarb Belgian Tripel 9.5%
- Brewed batches 1 (kegged then bottled remaining)
- Brewed for MARZ Brewing competition
Brewing notes: I love to eat and bake pie... this was inspired by some of those flavors. Many of my beers are inspired by my experiments cooking and baking in the kitchen. And this tasted like pie, a tart pie! It was a pricy and laborious brew, she took almost 2 months before she was ready to be kegged, but she's such a tart, I'd brew her all over again.
(Pic to left: glamor shot during the competition) 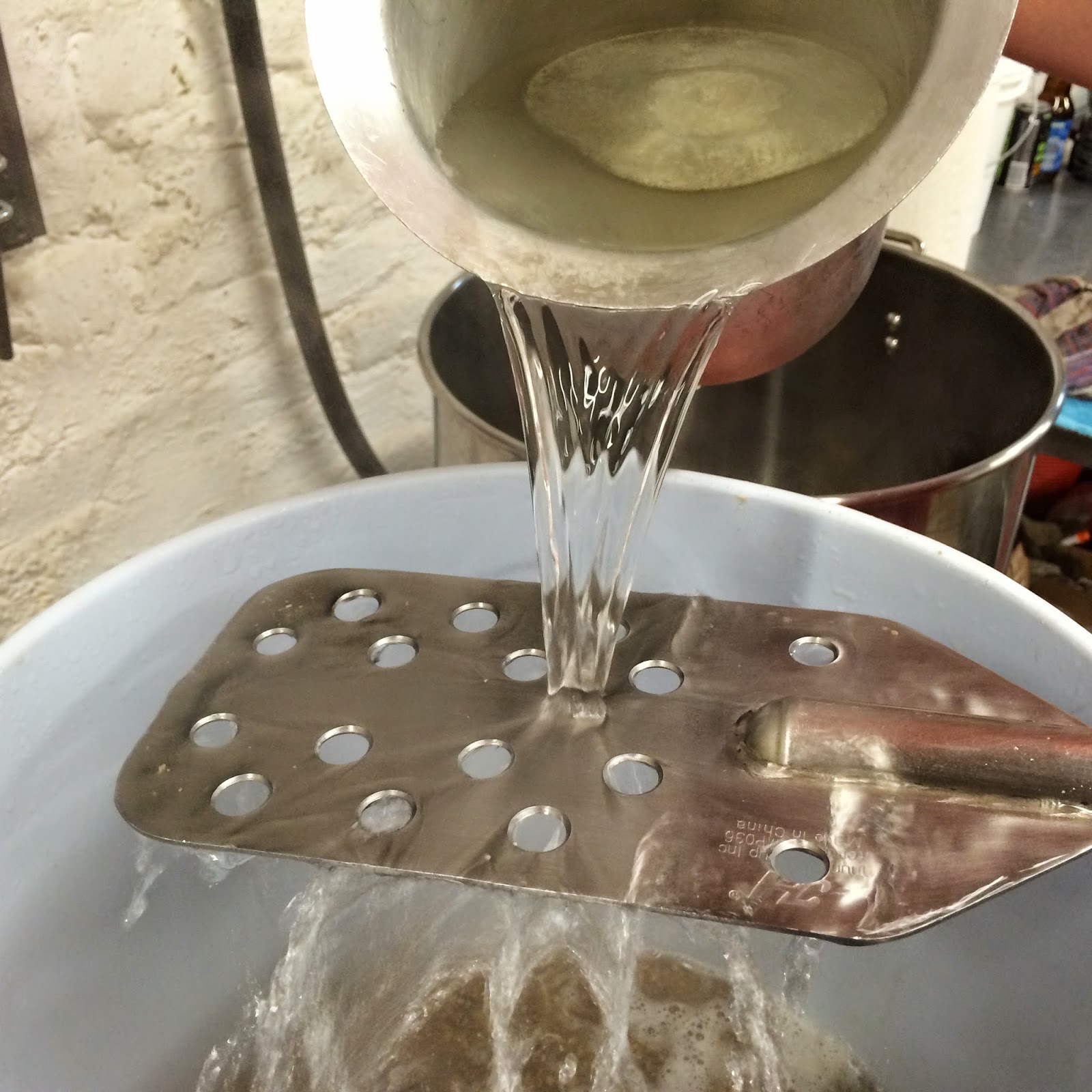 Bleed Cubby Blue > Boo-berry
Blueberry Basil Belgian Tripel 9.5%
- Brewed batches 2-4 (bottles)
- Brewed for myself and CHAOS Harvest Fest
Brewing notes: I brewed this beer very late in the season, hence the name change. The blueberry is very delicate and doesn't disturb the yeast flavors of the Tripel and I love basil contribution. Speaking of... I need to make my basil cider soon.
(Pic to left: sparging, using the paddle to evenly distribute hot water over the grains in the mash.)

What are your favorite warm weathered beers to brew and/or drink?