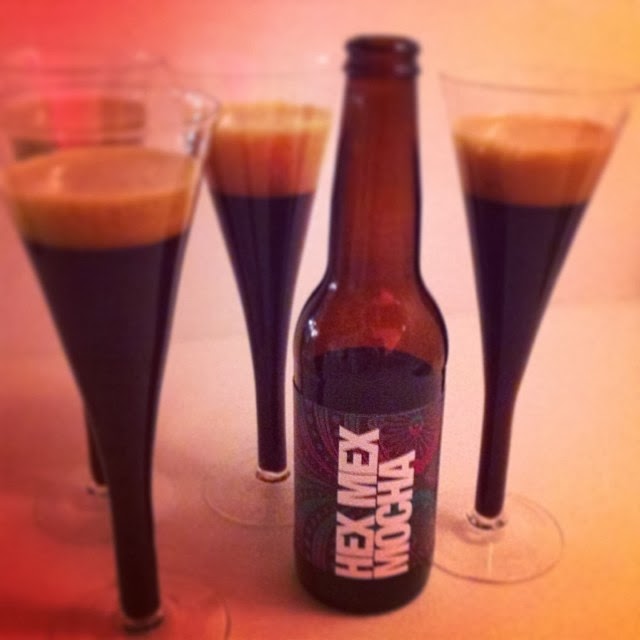 Hex Mex Mocha was my first attempt at a stout. I love stouts, they're one of my favorite styles of beer. When I was working on this recipe, I had constructed it specifically along the requirements for a beer competition that Nielsen-Massey was sponsoring, in partnership with CHAOS Home Brew Club. The challenge was to use any, one or two, of their extracts in a home-brew, any beer style accepted.

When I read the list of possible extracts to use, I stopped in my tracks at Mexican Pure Vanilla Extract, I knew exactly what I wanted to brew... A spicy Mexican mocha latte coffee stout! My sister turned me on to these tasty espresso beverages years ago. They are a popular Batista drink out in the Pacific Northwest, since they have a plethora of coffee shops. In Chicago, there is only one coffee shop, that I know of, who does them right, Corona Cafe, on Irving Park. I love the combination of the spicy chocolatey notes, with the bold roasted flavors of the coffee... yum! It's a special treat and something really wonderful to drink and hold in your hands, when you're in a snowy-wonderland like Chiberia.

Now my challenge was to translate this flavor profile into a beer. I used BeerSmith to formulate the malts, hops, and yeast, and then pulled my resources together for expertise advice on the special additives. I had a friend in the coffee industry, Ellie, who works at Specialty Coffee Association, who I had asked for her recommendation on the best coffee that would pair with a beer profile like this. I was expecting her to just recommend some coffee grounds I could purchase at a local store, but instead she connected me with Sean, who also happened to be a home brewer, and worked at Metropolis Coffee Company, in Chicago. We meet and I discussed with him the beer profile I was trying to go for and the flavors I was trying to convey. He offered to do some test samples of different roasts of a couple of different Mexican beans that Metropolis was roasting at the time, so I could decide what coffee would work best in the palette. After a coffee brewing taste off between the two varieties, I decided on Mexico El Retiro, it was the milder bean of the two, so I figured it would compliment all the other spices and flavors going on, rather than trying to overpower or clash if it was too robust.

Next was collecting the right spices for the brew. First up was getting authentic Mexican Chocolate, which I special ordered online through Mexican Grocer. Then, I headed to The Spice House in Old town, where I purchased: roasted cacao nibs, Ceylon ground, mace, and ground cayenne pepper.

Two things:
1) Fresh brew is the best brew. When making a coffee beer, brew the coffee on bottling day and add it fresh to your brew, just before bottling to lock in the flavors and keep it crisp... no one likes day old coffee.
2) Sometimes your yeast gets lazy. Not all sugars are eaten by yeast, some sugars they just ignore, and on this beer I found out exactly what that meant. I had a perfect FG reading when I racked it to the secondary, right before I added my Mexican chocolate and spices to the bucket. I knew that the chocolate had some small trace of sugar in the cocoa, so I had thought it would ferment and the yeast would enjoy another round of sugar, but instead they just ignored it and it never came back to that perfect FG. I had worried that it maybe was just taking extra time and that eventually it would come down, but after it remained the same after two weeks and discussing with fellow brewers, it was decided that it must be an un-fermentable. The yeast just weren't having any of it. This allowed the beer to have a bit of extra sweetness, which complimented the sweet stout and heat from the cayenne.

Hex Mex Mocha, won second place, in the vanilla category, at the Nielsen-Massey home-brew challenge, which was a BJCP sanctioned competition, held on Dec. 7, 2013, at Derby, in Chicago. Woot, woot!