Visiting a homebrewer with a sweet hookup 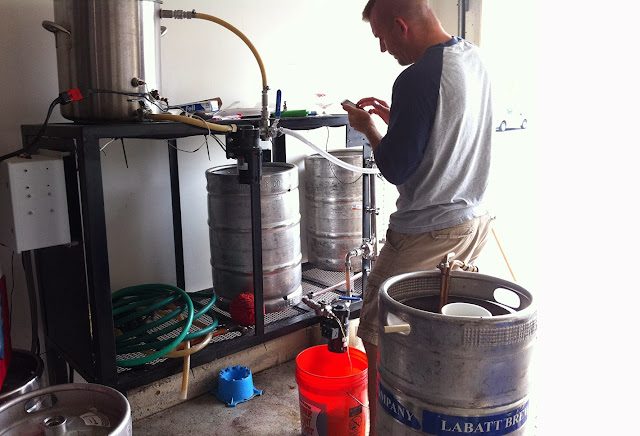 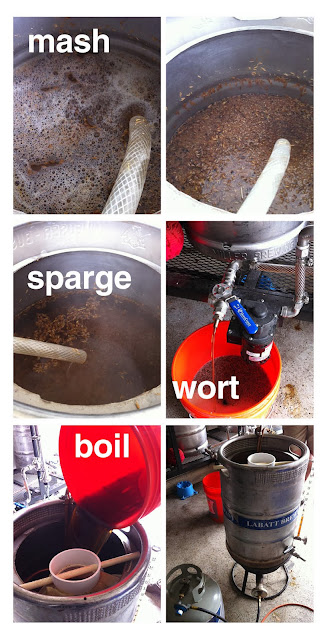 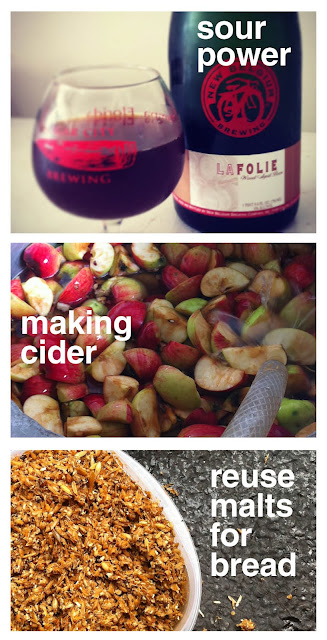 My friend Dave offered to introduce me to his good buddy Jason who is a wicked good home brewer. Jason's been brewing for years and turned his garage into a sweet little nano brewery. Equipped with a two tiered brewing system that is temperature controlled by his smart phone and oh yeah, in the back is a fridge with 4 taps. Yes, please... Where do I sign up for this... (including the extra space)?

Another awesome tidbit, is that most of Jason's contraptions, he built himself after researching structures and equipment online.

Jason does all grain brewing. I have yet to venture to this, but I'm planning in a few weeks to make the jump. I've broken down all grain into these simple steps. Most of my beers I have done some seeping of grains to extract wort, but I've been using extracts too, that are basically condensed wort to expedite the process. All grain is the process that all professional breweries use. In home-brewing it adds about 3-4 hours to the process, which means your brew day could be 7-9 hours. This is probably why the occasional home brewers uses extract, because you could brew a beer in about 4 hours.

MASH: The Mash is all your beer's grains. You want to extract the sugars from the grains by adding water and heating them. (Ratio: 1lb of grain 1L of water) Maintain temperature at 148-158 degrees.

SPARGE: Sparging is the process of rinsing the off the grains and just extracting the liquid that now has the sugar from the grains. You'll want to collect around 6.5 gallons in the end. The most efficient way to sparge is called continuous sparging. As you are extracting the liquid you're also adding 170 degree water to the top of the grain bed at the same rate.

WORT: Wort is what you're left with after sparging.You should have about 6.5 gallons of the sweet liquid.

BOIL: Begin to boil your wort (usually for an hour) add hops, spices to make your beer unique.

On this brew day Jason was brewing a pumpkin beer and we also helped him with a cider, chopping up the apples for the mash. He told me how easy it was to turn a cider or an apple juice hard. This made me want to experiment with ciders and different flavor combinations since the process was so quick in comparison to brewing time. I will write about my ciders soon.

When I took the train out to his place I was reading Zymugry and it happened to be the fall issue on pumpkin beers. Jason had approached his pumpkin beer similarly to the recipe outlined in the magazine. He was brewing an all grain beer and adding the pumpkin puree to the mash with rice hulls to help increase the drainage of the grain bed and prevent everything getting stuck together. Sometimes Jason also reuses his malts from the mash to make bread, he set aside some of the grains from the pumpkin beer for this purpose.

One of Jason's friends, Andrew, also came by to help out on brew day too. He brought one of the original bottles of La Folie, to share with us. The three of them had been to New Belgium years ago when they were first starting to make sours and happened to pick up a few bottles while they were there. Sours, like wine, and some other other barrel ages beers, age better with time. Wow, needless to say it was a super tasty brew day!