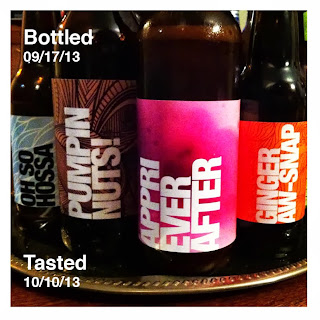 Inspiration
Appri Ever After, is my fifth home brew. It is an Apricot Belgian IPA. This beer was inspired by a play on words from "Happy" to... "Appri." I selected a Belgian IPA style to incorporate the apricot flavor, this was the first beer style I had brewed so I knew what to expect and I thought it would go best with an Apricot flavor, a bit sweet and tart with a bite.

Just as I had brewed the raspberry and the marionberry beers, I used a puree specific for brewing with the Apricot. 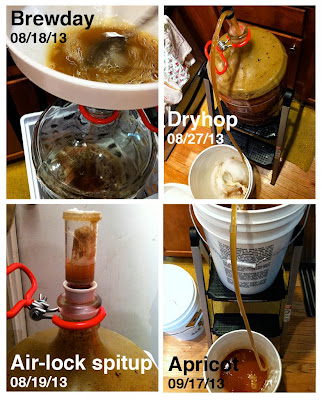 I think one of the hardest part about brewing is waiting, case in point, this beer took almost 8 weeks from brewing to tasting and I'm not a very patient person. Right after the second beer I started brewing more frequently so that I always have several going at one time in different stages I want to keep learning and move the process forward.

Lessons learned:
This also happens to be my first beer that I brewed in a carboy. Prior to this batch I had been using 5 gallon buckets. I was a bit intimidated to use the glass jug at first, it's heavy, breakable, and I thought it would be hard to clean, but after I got comfortable with the buckets I decided to give it a try and it worked great... accept the air lock system couldn't handle the carbonation from the yeast, because there wasn't enough space for air so it kept up-chucking into it.

Final Brew notes:
Bottled on Sept. 17 and tasted on Oct. 10, this beer is strong, flavorful and it will knock you off your block coming in at 9% ABV, it's the strongest beer I've made to date. It makes me so appri...