OK, so this is a learning process, and one thing I can tell you for sure is don't start brewing at 11:00pm after watching a Blackhawks playoff game. Sure, your adrenaline is going, you're pumped... You just drank a few beers, you saw your team go into overtime and win it, your friend says she'll come over and help, it will be fun! Umm.. then fast forward 4 hours later when you're finally done washing the last bucket and climb into bed... at 3AM. So this is the story of my first homebrew.

I started with a Belgian IPA brew kit, from Brewer's Best, one of the largest and most trusted home brew companies, purchased at Brew Camp, my local home brew store. I love Belgian styles so I figured this is where I would start, I just sort of picked one that I knew I'd like to drink and had a strong familiarity on how it should taste. It happened to be a rated intermediate for level of difficulty, this I didn't know until I started on Brew day, but hey, I'm a pro in the kitchen. I've made at least a half dozen successful Thanksgiving/Christmas turkeys and festive feasts, surely I could master following some instructions.

The first hurdle, was just getting to know the ingredients and recipe language. It's not like a Epicurious recipe that makes sense to the average kitchen guru. There's language like, racking, siphoning, steeping (OK, so this one is easy because you do this with tea), and then the ingredients are called things like... DME (Dried Malt Extract) or LME (Liquid Malt Extract), and then we probably need to go into explaining what malts are... it's endless. I decided just now I'll need to include a glossary of terms on a separate page for this blog.

I'm going to break it down as simply as I can for a brew day. 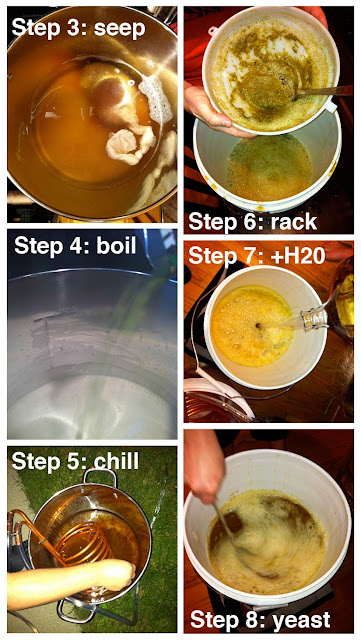 Step 3: Steep to create wort using only 2.5 gallons of water
Wort is simply a tea which is created when you steep grains. There are different ways to make your wort. You can use extracts, usually provided in a kit, which is what I used and then there is "All Grain" we'll discuss "All Grain" further down the road, since that process is more complex, but simply put, Extract is like getting your coffee ground and ready for you to brew as opposed to an all grain which is like buying the coffee beans and grinding them yourself, it takes an extra step when using "All Grains"

Step 4: Boil your wort and other ingredients that give your beer it's unique profile.
Adding them as you would in order of importance and ending with the most delicate aromatic ingredients last. Just as you would, if you cooked a meal, you'd start with the main focus, such as a protein, prepare the vegetables then ending with seasoning, herbs and accent flavors. It's the same with beer, and the last ingredient you add to your brew's boil is usually the first thing you smell when your sniff your beer.

Step 5: Kill the boil. Once all of your ingredients are in the pot you need to stop cooking them and bring the water temp down to 70 degrees Fahrenheit to preserve all the flavors.
This parallel's again with cooking. Once you're done cooking your protein, vegetables and herbs, you want to stop cooking, before you ruin all the flavors, overcook or burn them. You need to bring your brew down to 70 degrees as quickly as possible.
There are 2 ways to terminate your boil:
1) Place your pot of boiling wort in a sink filled with ice.
You're going to need a lot of ice and patience, this option takes the most time.
Also do not put ice directly in the pot, because it could contaminate your brew.
2) Use a purified wort chiller.
A wort chiller is a handy device that speeds up the cooling process. It's a copper coil that hooks up to a garden like hose nozzle and feeds cold water through it without letting water actually touch your brew. This is the fastest way to cool your wort and it still takes about 45 mins to bring the temp from 210 down to 70 degrees Fahrenheit.

Step 6: Rack (strain) your beer to remove excess ingredients as you transfer the liquid from the pot to the fermentation bucket.
You'll want the clearest liquid possible for drinking, so it's necessary to remove everything that can't be strained.

Step 7: Add enough purified water to bring your bucket to 5 gallons and calculate your ABV (Alcohol By Volume) with a device that measures the buoyancy of your brew.
This is the first part in the calculation of your beer's ABV. You'll take another reading on bottling day, so the first reading is just the first part of the calculation in the formula.

Step 8: Add yeast and secure lid on bucket.
Most home brew bucket kits come with an air-lock control lid that allows for air to release but not to get in. Yeast will produce two important bi-products necessary for beer: 1) carbonation 2) alcohol (yum)